Governmental ordinances and codes can vary greatly from one lake to the next. Our years of lake home building have made us very aware that complying with these ordinances greatly influences what size and shape of structure can be placed on a particular building site. We offer our knowledge of these factors to assist in the design and placement of your vacation home. The geographical processes that have occurred, which have allowed these beautiful lakes to form, may create sub-surface conditions that make it challenging to place a foundation. We know what indications to look for and how to proceed when those conditions are found to be present. When you select us to build your vacation home you can expect to receive the same quality of workmanship and materials that we use on homes we build in more conventional urban and suburban residential settings. 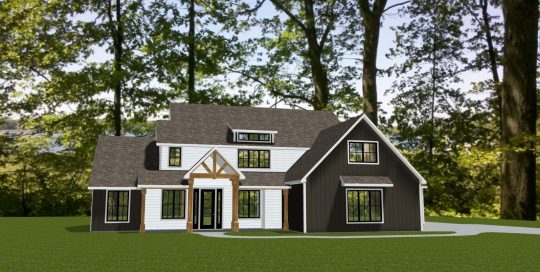 The site for this new lake home under construction is on Eagle Island in Steuben County. The island is nestled between Lake James and Snow Lake and is a spectacular setting for the new lake cottage. The lot was undelveloped which is a rarity for most lakes in northern Indiana. Wetlands near the home presented substantial design challenges for Lynn and ultimately a variance was required to allow the home to be designed to meet the owners criteria. The result is a vacation home that will offer 3,048 sq. ft. of living area on two floors. There will be views of the lake from the ground floor owner's bedroom, kitchen, dining and great room as well as two of three bedrooms on the second floor. Besides the three bedrooms and two baths, the second floor will also have an oversized bonus room that will provide space for varied uses. There [...] 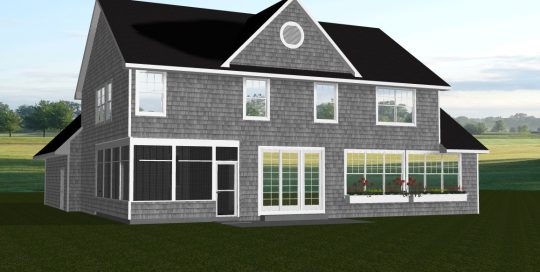 New Home Construction on Round LakeGallery

New Home Construction on Round Lake

New Home Construction on Round Lake

This 2,890 sq. ft. home was designed by Lynn to fit on the homesite and take advantage of the unique position of this lot. Situated between Clear Lake and Round Lake, the site offers wonderful views in seemingly every direction. The screened porch is placed in the design to take advantage of views of both lakes and will certainly be a much used outdoor room when completed. The home will have 3 bedrooms plus a bunk room and 3 1/2 baths. The 3 full baths will be directly accessed from the bedrooms and bunk room. There is a separate office on the second floor that can double as a 5th bedroom when necessary. The main floor will have an open design with the kitchen, dining area and great room seamlessly connected. There will be an attached oversized two-car garage with a walk-in attic above for additional storage. The ground conditions [...] 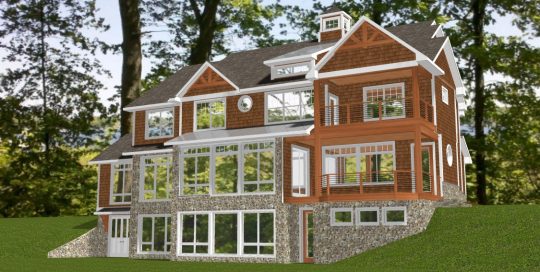 It should be no mystery why this bluff on a point overlooking the island was one of the very first properties on Clear Lake to have a home built on it many years ago. When one walks to the edge of the bluff, you are presented with possible one of the most gorgeous vistas on the lake. Sadly the existing home, that so nicely served its owners for many decades had seen its better days and with much deliberation it was decided that a new home would better meet the needs of those who call this property home. We are very grateful and honored to be chosen by the owners to design and build this home with them after having worked with them on another project just two years ago. The owners and Lynn have spent many hours working on a design that takes proper advantage of the unique offerings [...] 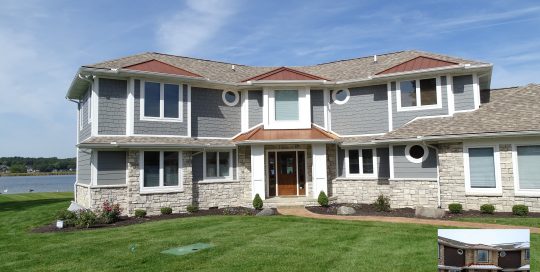 We are always very humbled and appreciative when we recieve a call from a past customer with a request to join them in another project. That was the case with this extensive renovation and remodel project in Sprague Addition on Snow Lake. This sprawling home on a huge lake-front lot was built in phases and was quite dated when the owners purchased the property. The owners shared their desire with Lynn to come up with a redesign of the central area of the home to provide a more open feel and enlarge the rather small kitchen. The complexity of the original design of the home made the redesign very challenging but we feel ultimately delivered on the owner's wishes. We also added a new covered porch with outdoor kitchen overlooking the lake and completely refinished the exterior of the home with fiber-cement siding and manufactured stone. This was, most likely, [...]

Demolition of the existing older ranch home made way for this cool new home built on a gorgeous lot at Sowless Bay on Lake James. The owners originally contacted Lynn about the prospect of renovating and expanding the existing cottage. Plans and pricing for the project were finalized but the owners revealed that they were curious how a demolition and new build would compare to the remodel/expansion. It was determined that the demo/new build made more sense for them. Interestingly, the new home Lynn designed, as instructed by the owners, is very similar to the layout that was proposed for the remodel and addition. In fact, a large stone wall facing the road on the existing home caught the fancy of the owners and Lynn. Consequently, the stone wall has been recreated on the new home and is positioned in the exact location that the original wall was located. The [...]